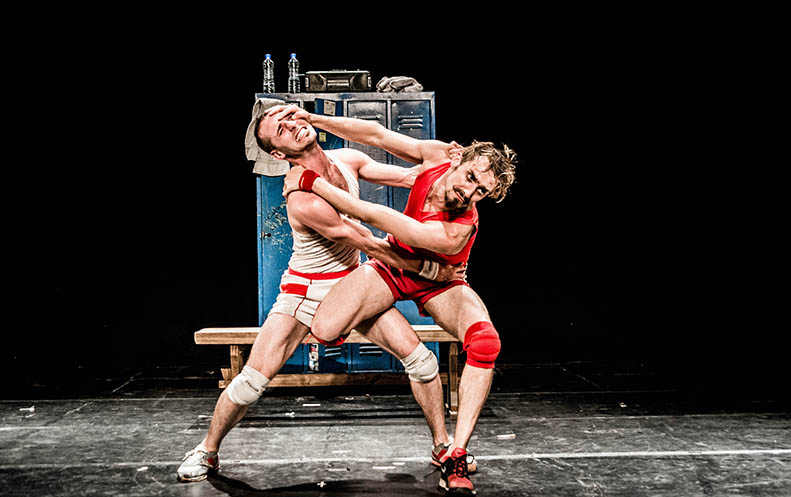 Un Poyo Rojo is a 2008 project by the two performers Nicolàs Poggi and Luciano Rosso. An explosive show that has grown and transformed over the years, oscillating between dance and athletics through martial arts, acrobatics, clownerie, selling out both in Argentina and Europe. Un Poyo Rojo is a provocation that moves through a bodily score of conflict, seduction, martial arts and variété, physicality and comedy, ambiguity and desire, hugs and battles, elastic attacks and cheerful resistances. An invitation to laugh at ourselves by exploring all physical and spiritual possibilities.

Un Poyo Rojo is a project born in Buenos Aires in 2008 by Nicolàs Poggi and Luciano Rosso. It has been performed in many spaces and festivals in the city of Buenos Aires, such as the Ciudad Cultural Konex, Teatro del Perro, Teatro Martinelli and Circo del Aire among others, as well as in the Ciudanza Urban Dance Festival in collaboration with Hermes Gaido, the current troupe director. The project was also selected to perform at Festival del Teatro Rafaela in Santa Fé and at the Festival El Cruce in the city of Rosario in September 2009. In 2011 they resumed repetitions in Buenos Aires with Alfonso Barón, completing three fully sold-out seasons and continuing their tour in various Argentine provinces. In 2015 they launched their first six-month world tour visiting several countries, such as Uruguay, Bolivia, France, Italy, Spain, Switzerland, Germany and New Caledonia. In 2016 they took part in several international festivals in various European cities. During their tournée they hold educational and artistic workshops.